a change in location

Hi all. We are officially moving our blogging onto the new RDI OS system. In reality, though, we are doing less blogging overall because we now meet with our consultant on a weekly basis - this has been a wonderful change!

However, never fear, we will still be posting our video reviews up on youtube to share with other parents - though there will likely be fewer of those as well. Check out our youtube under the name "fatakw" or type in RDI as a search term and you will find us!

In case anyone was wondering where we are, we have been taking a break since late October in light of the arrival of Henry's little bro, Cyrus, and the craziness of the holidays. We hope to be back up to posting and videoing in the new year, as soon as we can find a new RDI consultant to work with - check back later.
Posted by Theresa on 1/02/2008 1 comment:
Labels: Theresa

RCR Struggles and interesting thoughts from the webinar

i've been meaning to write all weekend, and now it's wed night and i'm finally getting around to it...aggh, life gets so busy.

I've been working various RCR activities with Henry all weekend and this week. We averaged about 10 a day over the weekend, but probably just two or three per day during the week. they ranged from anything from throwing acorns together to putting the dog treats in the container together. I tried to do the non-verbal inviting thing with many of them to get started, but that didn't really work - henry mostly ignored me until i asked him to come participate.

he would try to participate and he especially likes it when i add in funny sound effects, like a big karate chop "high-ya" and then we throw something somewhere together. however, we're not really getting a rhythm with this at all. he doesn't seem to be able to self regulate so we throw at the same time, and i can't do all the repair work for him. oftentimes i have to revert back to a 1-2-3-throw a few times before he starts to get it, or i do hand over hand a few times. but most of our activities do not last longer than 3-5 minutes, so it seems like he's never really "getting" it. i will keep on plugging away though. any advice?

also, attended the parent webinar last night and Gutstein, as always, had some good advice and stuff to work on. Basically the majority of the hour talked about transfer of responsibility - one of the things i found interesting was Gutstein telling parents to be sure not to allow the kid to take a passive role in the activity (a good example he gave was carrying a bag together, where when the kid lets go, you pick up the slack instead of letting if fall. i do that for sure!) so i'm trying to be mindful of when i might be "scaffolding" too much and allowing henry to take a passive role in our interactions, whatever they may be.

Gutstein also talked about having a short, 1-3 word thought to describe the objective that you are working on and carrying it with you throughout the day, being mindful of incorporating it if you can into every interaction with your kid til it becomes second-nature. My thought for now is "don't talk-use non-verbal"

also, another little anecdote and then i'll wrap up here. henry has discovered where the books are locked up in the "activity room". yesterday he indicated that he wanted to "jump on the bed", which i was psyched about b/c that was an activity that we had done together the previous day with Rosie and had a really good time playing and laughing together. of course, i said, lets go upstairs and jump and he said "no, here"...he wanted to enter the activity room. so i suspected something was up, when i let him in he went straight for the books. then he says "i love books". i said "henry, you told mommy you wanted to jump on the bed" and he attempted one pathetic jump to try to please me and then stared over at the books. i went ahead and let him have his fix, the poor kid. Never let them tell you that an autistic kid can't manipulate or won't lie - he played that one just right!
Posted by Theresa on 10/10/2007 No comments:
Labels: Theresa

I sort of had a light bulb go off the other day when I was giving Henry his daily 'before bed bowl of cereal'. Just as we use an intermediate bowl to allow Henry to make many small dumps when adding ingredients to the mixing bowl, I've begun to do the same thing with his cereal and milk. The first time I did it, he caught on right away. Unlike baking, which we're only able to do once or twice a week, the kid eats several bowl of cereal a day so this should introduce many more occasions for RCR.

Since we have millions of acorns on our property at the moment, I'm going to try to incorporate them in an RCR activity tomorrow. I'll probably just hand him acorns and have him throw them somewhere... we'll see.
Posted by Aaron on 9/29/2007 No comments:

Mom - Non-Verbal
Mom and Henry continue to target Objective 5 use of non-verbals in a few different activities.

Dad - Non-Verbal
Like I mentioned in the video, I'm not sure this was a good activity to target objective 5 after all because he's done this so many times and he knows his role pretty well. I just gotta get him to stop tasting the batter!

Dad - Give/Put
In these videos, I'm thought I was doing RCR until I started editing the video and remembered that I'm not supposed to talk for that - but still think this was a productive activity regardless. Another thing I observed was that even though I did all these videos last night in a span of about an hour and a half, I don't think it seemed forced to him. To me, it was a little rushed but the point I'm trying to make is that he seemed to go along with everything without a fight so I guess he was enjoying himself somewhat.

The Star of the Show 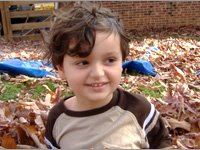 What's going on in that head?

In a nutshell, RDI (Relationship Development Intervention) provides a path for people on the autism spectrum to learn friendship, empathy, and a love of sharing their world and experiences with others.

This blog is a means for us to log our interactions with Henry, as well as a tool for communicating with our kick-ass RDI consultant, Missy.